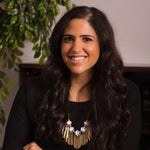 Shirley Chera has more than 10 years of administrative experience at Martin Friedlander PC. She serves as the Firm's Office manager working with the managing partner and associates on governance, organization and communication issues.